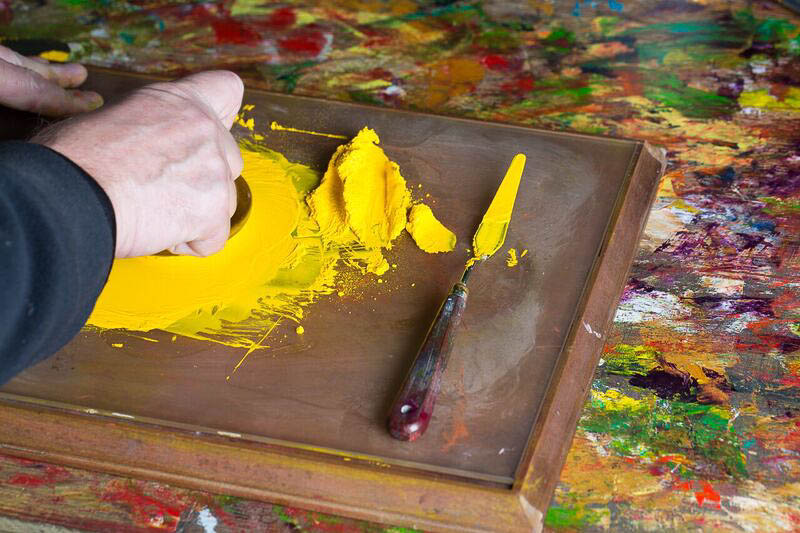 Michael Harding – The Art of Colour

Have you ever heard of Michael Harding Handmade Artist’s Oil Colours? Well, if you haven't we suggest you to read this exclusive interview with Michael Harding, a master paint maker behind the most exceptional oil paints in the market. Time to switch from acrylic to oil paints, folks!
Share on facebook
Share on whatsapp
Share on linkedin
Share on twitter

LONDON, United Kingdom — In my local art shop there is a variety of oil paints to suit an array of abilities and budgets. There are student quality and mid range paints, and those aimed at professional artists. Then there is a section called Michael Harding Handmade Artist’s Oil Colours. “What are these?” I ask the sales assistant when I decide to switch from acrylic to oil paints. “Oh those are lovely, but pricey,” she says. “It’s something to do with the pigments he uses.” In my art school people are talking about buying a single tube of Michael Harding paint and about the wonderful depth of the colours. I struggle to understand the hype, and then I see a portrait artist (whose work I greatly admire) post a photo of Michael Harding paints on Instagram. “Oh, so he uses them,” I think to myself, “I wonder if that gives him an edge?”

I contact Michael Harding for an interview, which takes some doing given he is constantly travelling. During our hour long conversation, there are a series of anecdotes some of which include Lucian Freud and David Hockney. Michael is a skilled spokesman and raconteur, and while we talk, he walks around his Boston home holding his laptop up so I can see his art collection. It is a fun and enriching conversation that goes beyond sales talk to discussions about art and what it means to be an artist.

“So what’s so special about your paints?” I ask, “Is it the ingredients?” Michael says it is more a case of what he is not putting in them, namely fillers, extenders and something called siccatives. These are the bulking and drying agents that result in muddiness when mixing or working wet into wet. “Things that mute or disrupt the colour” he says.

Michael, who considers himself a master paint maker first and figurative artist second, started making oil paints in his London flat in 1982. Frustrated with his art, he tried to understand what constituted truly great work. “I’d look at Old Master paintings in the National Gallery in London,” he recounts, “and think, OK, he’s got genius and he’s got skills that I don’t have, but it’s like he’s working with a completely different box of tricks. What’s going on here?” The commercial paints he was using at the time felt limiting. “I found that I was struggling with the material – pushing it around,” he recalls. “Sometimes it would go off into a grey, stodgy mess – mud. Other times I’d get lucky and was able to put that brush stroke on the canvas that I’d envisaged. Once you start struggling with the material, it just makes things so much harder. Painting and drawing are already hard enough as it is,” he says emphatically.

To understand how the Old Masters created their beautiful hand-made paints that continue to maintain their brilliance through the decades, Michael consulted the technical bulletins available in the National Gallery in addition to historical books. “These texts are designed for either aficionados of art materials or conservators,” he says, “but if you read between the lines, you can find information about what the ingredients of the paint were, and weren’t more importantly.” Almost immediately Michael started supplying the Royal College of Art and the Victoria and Albert Museum, and as word spread there was a demand for his paints.

It is self-evident that Michael Harding is also a perfectionist about the mixture he uses in his paints. He likens his paint making to being a chef that uses only essential and ‘clean’ ingredients, and has been sourcing specialist pigments around the world for over 25 years. Some of these, like his hallowed Lapis Lazuli, are incredibly rare and difficult to source. Michael talks about Lapis Lazuli pirates, and the dangers experienced by those mining it. It explains the price of £94.20 ($137.22) for a 60ml tube of his paint by the same name.

Michael’s is an inspiring story about what happens when you invent a quality product to serve your own needs that goes on to become a commercial success. But he remains hands on, and when he’s not collecting horse droppings near his factory in Wales to make Stack Lead White in the Dutch tradition, he is on the international road promoting his paints and liaising with other artists. “Many artists bring or send me pigments, stories and visions of grandeur on the virtues of a colour,” he says.

That’s the role of my life, in a way. I’m not just about making paints and selling them for a profit. I am fundamentally involved with art: I collect it and I live it. I take huge pride and satisfaction in knowing that I genuinely do help artists.

Putting it to the test

Obviously, I had to try these paints for myself. I purchased a handful of them and discovered that their reputation is well deserved and that the quality is genuinely superior to anything I have used before. Where I might need a great big squeeze of, say, Cadmium Red in my usual brand, I only require the smallest amount of Michael Harding’s. Even the tiniest amount is super concentrated, so despite spending more my paint is actually going further. The colours are vibrant and inspiring to work with. Now if I can only sell a painting, I can continue to buy them without having to hide the receipts from my partner.

“Michael is bringing out two new colours,” the visibly excited art shop assistant tells me on the weekend. In a few minutes, a handful of artists eager to discuss the news have gathered around and there’s a bit of a competitive edge between us as to who knows more about his paints. “Well I’ve just interviewed him,” I say smugly, enjoying my brief upper hand and the looks of admiration and envy I’m getting.