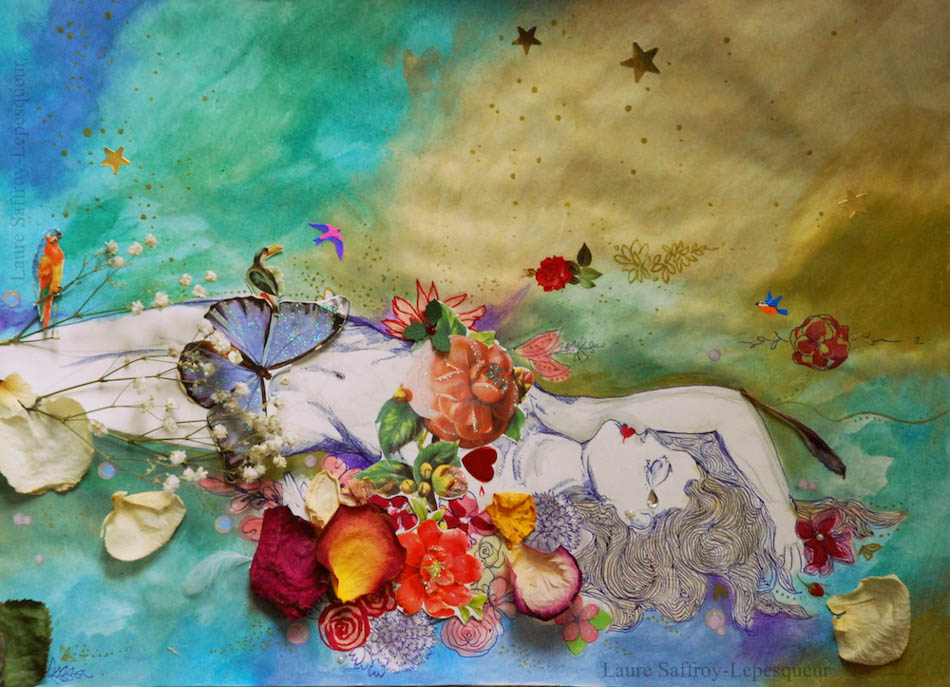 We walk you through an initial passive admiration of works of art to the artistic process of image creation with the wonderful Laure Saffroy-Lepesqueur, a young French artist whose works on paper are both colourful and inspired. She creates a very unique and bright universe with her “Contemporary icons”, a series of paintings that convey poetic messages which reflect very personal states of mind.
Share on facebook
Share on whatsapp
Share on linkedin
Share on twitter

PARIS, France — During one my endless strolls through a museum, I was struck by a muse of the belle époque: the portrait of Marchesa Luisa Casati by Italian painter Giovanni Boldini. From my initial passive admiration of this beautiful painting, I asked myself how does one consider the artistic process of image creation?  I had the same consideration when I first discovered the creative work of Laure Saffroy-Lepesqueur who describes herself as a modern “faiseuse d’images”.

The Path to Image Creation

Laure Saffroy-Lepesqueur is a young French artist currently finishing her Master’s degree in History of Art at the prestigious Ecole du Louvre in Paris. Laure said that art, in its different expressions, was always part of her life while growing up. During her teenage years, she enrolled at the Academy of Dramatic Arts of Rouen, her native city, before moving to Paris where she pursued her graduate studies.

In parallel to her artistic work as an illustrator, Laure is currently conducting research on the figure of female live models in Paris’ nineteenth century artistic scene: a subject she finds most fascinating as she believes that for so long women have been underrepresented in Western art history. The artist commented:

It is important to praise the work of many female artists across time who were brave enough to overcome the limitations of their gender in order to excel in what was believed to be a male dominated field.

Laure also stated that throughout history, women have always endorsed a “decorative role” as they were often depicted by male virtuosos as idealised images of beauty, nature and desire. In that sense she added: “Women have always been artists and with my work I intend to celebrate them as poetical sources of inspiration. I wish to value women and their contribution to the art world, either as creators, writers or performers.”

Laure started exhibiting her drawings and paintings two years ago, mainly in local art-oriented cafés and small publishing houses. She considers the recent launch of her artistic career as a natural process born from her incursions in theatre, history of art and her passion for drawing and colour.

A Synthesis of Inspirations

Laure Saffroy’s artistic universe is inspired mainly by female characters from literature but also from everyday life Parisian women. Her languish and colourful female figures convey a much more profound message as they often represent a state of mind, a feeling or a sensation. When asked about the creative process of her work, the artist affirmed that she does not have an established method and that the conception of her visions usually comes naturally while sleeping, reading or writing.

As for the technique of her painted pictures, Laure works almost exclusively on paper, experimenting with acrylic, gouache and pastel colours. She most recently started exploring painting on wooden panels but insists on her predilection for paper, as she finds its fragility both, moving and aesthetically interesting.

The originality of her creations also comes from the mixed techniques she uses in some of her artworks. For example, Ophélie Nouvelle is a whimsical reinterpretation of Shakespeare’s heroine, but with a twist of modernity as the drawing figure is submerged in a collage of various elements such as wilted flowers, rose petals and paper prints.

I couldn’t help but notice that gold colour is a recurrent component in Laure’s artistic output. When asked about this, Laure explained: “I am instinctively attracted to everything that is gold. For me, this magnificent and luminous colour represents intemporality and timeless beauty. I also find my inspiration from amazing artists that have worked with golden shades such as Gustav Klimt or Helene Schjerfbeck.”

Over fifty of Laure’s paintings were exhibited last February at the majestic Madeleine Church in Paris. The church’s basement – called The Foyer de la Madeleine – is an interesting platform for local artists run by an association (Madeleine 2000) that regularly organises temporary art exhibitions within the church’s interiors.

The natural softened light of this location and the subdued atmosphere allowed this artist to show a selection of works on paper inspired by traditional painted icons. As Laure explained: “My intention with the series of Contemporary icons was not to imitate religious painting as my works were not conceived as figures of devotion. Nevertheless, I believe that to some extent they carry a certain degree of spirituality, but a different kind of spirituality, one that is not necessarily religious.”

Laure Saffroy’s very personal interpretation of painted icons allowed her to explore with colour as well as with texture as she defines herself as a relentless soul always in the search of beautiful impressions.

As part of a workshop organised by the “Dr Sketchy’s Anti-Art School” association, Laure filled the shoes of a Degas’s ballerina during a special drawing soirée at the recently renovated Musée Jean-Jaques Henner. The evening dedicated to French Fin de siècle gathered drawing amateurs for an unusual mix of drawing experience alongside life models wearing prodigious costumes by French corset designer François Tamarin. The original staging as well as the authentic atmosphere granted the artist a complete immersion into the skin of one of the many exceptional – yet generally anonymous – female life models that, for centuries, have contributed to artistic creation.

Laure told us that this exceptional opportunity allowed her to better understand the difficulty of the exercise as life posing requires discipline and much concentration. Above all, she found the experience inspiring as she strongly believes in Baudelaire’s concept of correspondences between the arts, who she was happy to quote: “As Baudelaire used to say: ‘Dance is a poetry with arms and legs’”.

Laure Saffroy is currently exploring photography, a medium she finds exciting and resourceful for her emerging artistic career. Poetry has also an important place in the artist’s creative universe but for the moment she wishes to keep that aspect of her talent private. What we know for sure is that Laure considers herself more an illustrator, as she wishes to keep telling stories through her personal and yet very emotional and colourful pictures.