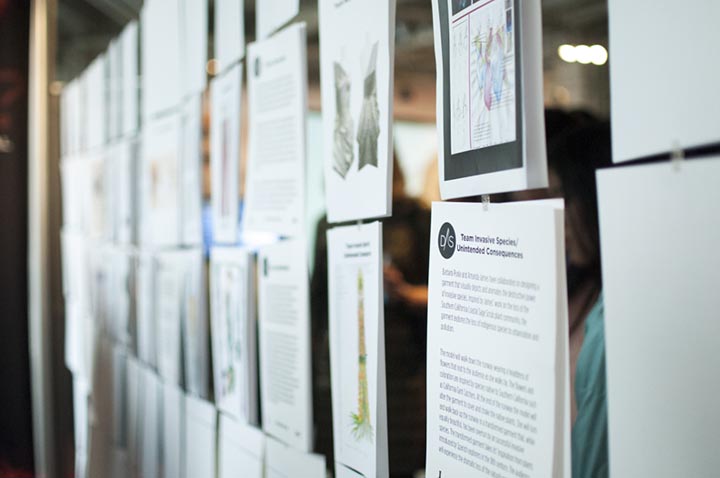 LONDON, United Kingdom — Many great advances in human creativity and innovation have resulted from collaborations between different fields of study or industry where diverse concepts generate unique constructions. Exploring new fields and the synergies that you can find between them is a fascinating method to find inspiration and explore the unknown.

The FG Magazine recently introduced the Descience competition as the teams of scientists and designers were pairing up to produce fashion designs inspired by scientific research to be presented at Descience Runway 2014. In the next stage of the competition, 60 teams presented on 25th April a visual representation of their progress to 300 attendees at the MIT Museum at the Cambridge Science Festival. Dr. Yuly Fuentes-Medel, Descience Executive Director, explains:

“This event provided an important milestone for the project since it was the first time that the collaborative process of individual teams was shared with the world. The public got to see how teams are planning to make science tangible on the runway. At the event, the disparate worlds of science and fashion came together and had a conversation, each learning what the other had to offer.”

The first team that we met is exploring the nexus between aesthetics, sound and touch through their imaginative design and sketch.

Harry Umen has worked with technology and art throughout his professional career. His aesthetic as a visual artist and designer is driven by his keen interest in Russian Constructivist and Bauhaus artists which has led him to explore and produce creative pieces engaged with systems, materials and generative processes. When asked why he joined Descience, Umen explained, “Collaboration is something I enjoy immensely; the process of working with another creative person with a different perspective frees the ego from blockages inherent to new possibilities.”

The scientific side of the team is Angela Chang, an audio-haptic researcher who studies how sounds can be felt and heard. She uses a microscope, microphone and software to visualise the sonic landscape that results from fabric moving against skin or other surfaces as the body moves. As Chang states, “I want to create interfaces that help people become more creative such as touching and non-verbal gestures that improve our everyday communications.”

“To don this garment is to encase oneself in a living vessel of light, like a firefly. The light radiates off the soft wearable material, hinting at the duality in the sensual tactile quality of the fabric and the tough structured bodice that provides protection and utility. The dress illumination references the organic petals of a flower and as the wearer moves, her motions affect how the satiny material reflects the light against her skin.”

From an early stage, this team expected that their skills in 3D light microscopy, 3D printing and laser cutting would lead to the realisation of a unique concept.

Ana Thompson’s background is in Industrial and Jewellery Design and she is fascinated by electron microscopy images of the hidden worlds of micro-organisms that capture forms, shapes and patterns invisible to the naked eye. These images inspire her jewellery designs that are created using 3D modelling and printing techniques as the medium to reveal their hidden beauty. Thompson tells us why Descience is so exciting for her, “With my interest in the aesthetics of the microscopic world, understanding the beauty that is seen through a scientist’s eye will enrich my own appreciation of this frontier and help to inform my future projects.”

Sean Speese’s research in molecular biology explores the budding of the nuclear envelope of cells as a way for genetic information to move out of the nucleus into the rest of the cell, using microscopic imaging techniques. Speese tells us, “… I feel that science and fashion may have in common the journey along a curvy path where we do not know exactly what is awaiting at the end… I am incredibly keen to see what inspiration a designer could draw from my images of our microscopic world.”

The dress the team is working on is inspired by the multiple layers of the nuclear envelope. They have created a two layered design with the underlayer representing the nuclear lamina (a mesh-like structure).

To create this lamina under-layer in the dress we use a pattern, partially generated from real images of the lamina, to drive a laser-cutting machine. The second layer of the dress will be sheer printed with a pattern representing the nuclear periphery, allowing one to see the ‘lamina’ underneath.

This team decided to embrace the synergy between “artefacts” produced by scientific experiments and fashion’s “deconstruction” movement.

Delicate lines, geometric shapes and sexy silhouettes are some of the main attributes to Minh Phuong’s designs. This Fashion Design sophomore combines classic minimalism with femme fatale appeal, femininity with avant-garde grandeur, and wearability with extreme oddity. “I want to incorporate and intertwine inspiration into the surface, form and even the fibre of my design. I am not afraid to experiment with unconventional materials. I am interested in creating something that transcends the realms of runway clichés,” he explains.

Serendipia’s scientific arm is Ferdinando Pucci, who conducts cancer research at Massachusetts General Hospital. Pucci explains that observations coming out of scientific experiments may or may not be real. In science, an artefact is data that looks promising but is in fact the error of man or machine. The image he shared with Phuong is what he calls an “artefact; a dot that represents a cell from a disaggregated tumour mass with the colour gradient representing the density of cells.” In describing his eagerness to participate in this multidisciplinary project, Pucci expounded,

I believe it is a great resource to innovate in every field by importing concepts from other fields. The further away the fields, the more challenging, but the more intriguing. [Descience] fits so well in this mind-set that I could not resist to give it a try!

The team’s goal is to “create a conceptual fashion piece that reaches beyond the realms of both disciplines.” They will “[focus] on how a garment can be morphed, distorted and juxtaposed on a human body,” a process “reminiscent of how cancerous cells mutate and change.” Their look will be deconstructed, exploring the idea of the “artefact” in science and design.

The similarities that exist between the scientific and fashion worlds are stunning and it is impressive to see how a collaborative mood between talented people and creative minds from different backgrounds can translate scientific discovery into a visual message, a wearable construct that celebrates the gift of human imagination, natural talent and personal passion. Continue to follow us as there is more news to come at the next milestone!