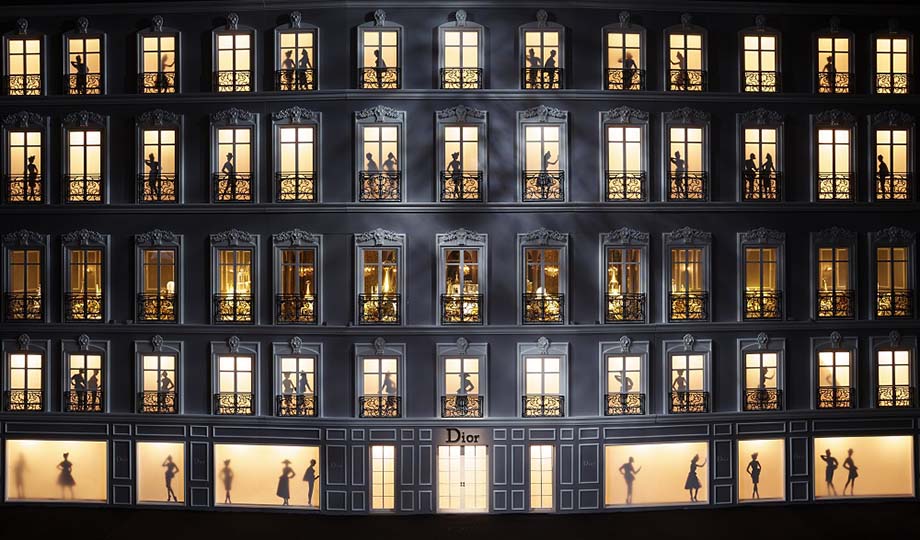 A Taste of the Fantastic Dior Exhibition at Harrods!

LONDON, United Kingdom —  Strolling along Brompton Road in Knightsbridge, it is impossible not to stop and admire the animated windows of Harrods currently displaying designs and accessories of the House of Dior with a London-inspired backdrop that includes Lady Dior bags hanging on Tower Bridge and the London Eye featuring cabins made of Miss Dior bottles. This is just a taste of the fantastic “So Dior” exhibition at Harrods currently running until mid-April.

So Dior exhibition at Harrods: The Interiors of the Maison Dior

Inside Harrods, Dior’s pop-up-store indulges you with classic and limited edition accessories featuring a replica of the interiors of the Maison Dior, transporting you directly to 30 Avenue Montaigne.

As you enter the “So Dior” exhibition on the 4th floor, there is an army of assistants, impeccably dressed head-to-toe in black, ready to receive guests and walk them around the exhibition sharing insightful stories, highlighting subtle details and pointing out peculiar aspects of the unique objects and designs on display.

My Dior guide, Julian Roussel, takes me through the entrance and I am immediately enchanted by a beautiful reconstruction of the façade of 30 Avenue Montaigne with its New Look silhouettes and little Miss Dior and J’adore bottles. My attention is then diverted by a short black and white film that walks you through Dior’s life, successes and the unceasing work of the Parisian fashion house.

Further in, I find a row of fabulous sketches ad designs in ‘toile’ from John Galliano and Raf Simons featuring their own interpretation of the 8 shape that recalls “the numerous feminine curves”, a signature design of Dior presented for the first time in his famous wasp-waisted and hip-padded designs launched in 1947 with the Bar Jacket as its most emblematic design, currently on display. Curiously, the number eight was the couturier’s lucky number that determined even the number of aids that would travel with him at a time!

There is a 3D book where you can read, watch and listen to the narrative behind the designs, the patterns, the haute couture, the men’s Dior suits tailoring, the jewellery and the new range of skincare.  A few steps further, you find yourself in front of a tribute to the J’adore campaign with a backless dress in nude silk chiffon worn by actress Charlize Theron, surrounded by more than one hundred perfectly aligned J’adore bottles.

You will also find a Baccarat perfume bottle Diorling launched in 1963 and a collection of Miss Dior bottles engraved with a houndstooth motif – one of them featuring the original black ribbon that Dior himself spontaneously tided up on the bottle to give that finishing touch of a bow-tie. Dior was the first designer who managed to launch fashion and a fragrance at the same time because for Dior, “Perfume is the feminine personality’s indispensable accessory, it’s the finishing touch to a dress”.

“Perfume is the feminine personality’s indispensable accessory, it’s the finishing touch to a dress”.

The manifestation of Dior’s fondness for Britain and English style and his relationship with the Royal family is represented with illustrations including Dior’s fashion show held for the British Red Cross staged at Blenheim Palace on 3 November 1954. Princess Margaret was a guest of honour at that event and  there was also a photograph of the Princess wearing a white Dior ballgown for her 21st birthday in 1951.

Impossible to miss are an array of glorious ballgowns and shimmering dresses including the gown worn by Elizabeth Taylor for the Academy Awards in 1961, the Midnight blue gown worn by Princess Diana in 1996, a wonderful “Garden of Versailles” dress featuring a thousand flowers made of miniature silk mousseline dotes created by Raf Simons and worn by the Natalie Portman on the new Miss Dior campaign, which is played in a traditional London phone-box that diffuses Miss Dior fragrance, and a magnificent recreation of Dior’s most emblematic silhouettes in a mini theatre recalling the Fashion Theatre by Harrods in 1953.

The exhibition culminates with a room dedicated to the Lady Dior handbag. A gigantic bag with the classic mattelassé quilting design is used as a screen to project a video on how the handbag is crafted. There is also a modern interpretation of the Lady Dior bag from new talented designers. My favourite? The bag made of coloured copper wires by Alice Anderson!

But there is still more to be seen….my next stop? Dior Café. Follow me into my culinary Diorised experience!