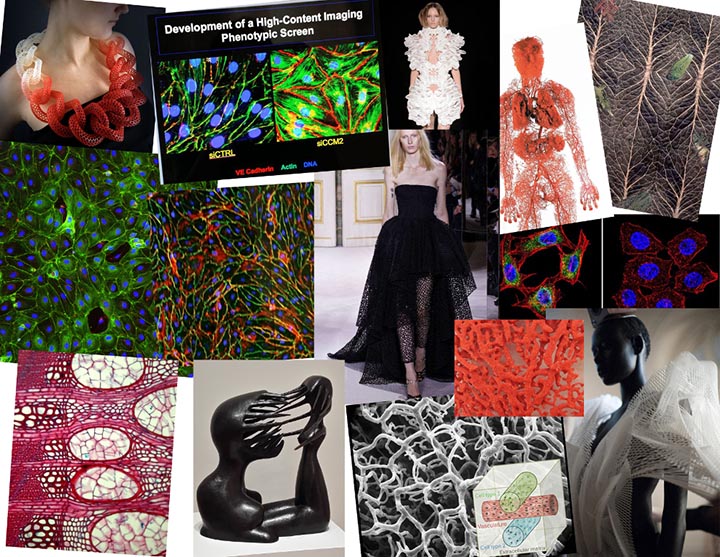 LONDON, United Kingdom — Descience is bringing together scientific discovery and fashion inspiration for the first time through an innovative runway event, with garments being produced by teams consisting of one scientist and one designer. The contestants are currently collaborating to create a runway look inspired by scientific research. We catch up with Candice Wu and Christopher Gibson from Team OrphaCure, Erica Templeman and Torben Bruck from Team Fermentase, Arielle Gogh and Esther Baena from Team Transmutation to hear about their concepts and the progress they are making as they start to bring their designs to life – one of the most important and exciting stages of the competition.

Firstly, we were keen to understand the inspiration for their designs and the messages that the teams are trying to get across:

Team OrphaCure tells us that although diseases come in many forms, the experience of feeling alone when you are diagnosed with a rare disease is represented in their dress. “We are also trying to portray the experience of finding a community of other patients, advocates, scientists, and healthcare providers who support each other in the quest for cures,” the team explains. This dress evokes all of these feelings, built entirely off of the cellular texture and patterns that are used to find new drugs to treat rare genetic diseases.

Team Fermentase have taken a more personal approach, one of the team members has Crohn’s disease and has used medicine developed with fermentation science to battle this disease. They wish to convey strength and beauty in the face of battle.

Team Transmutation’s design represents the power of transformation and the diversity of mutations and conveys this through the multitude of colours used. As the team members explain:

“Some of the colours cover bigger areas representing clonal tumour expansion, some of which will evolve to metastatic late stages that get to further locations in the body.”

The ideas behind all of the creations are highly relevant to the challenges facing modern society and it will be fascinating to see how these ideas are represented in the final garments. We asked the teams how they will physically bring their creations to life and what challenges they had faced so far.

3-D printing has been incorporated throughout OrphaCure’s project. This technology sits perfectly at the nexus of science, fashion and design and helps to showcase the dimensionality of the concepts, patterns and textures they are working with. Although the end result is exciting, incorporating the 3-D printing technology and using it as an effective tool in their workflow has been one of the team’s biggest challenges.

The most intimidating challenge facing the Fermentase Team thus far has been designing the custom textile to look like chainmail from distance, but up close to have many of the basic shapes and structure of proteins and antibodies. They explain:

Digitally, it renders beautifully, but the chemical code that makes up the lines in the chain is very difficult to read once it is printed.

For Transmutation’s design, they chose to use silk organza. The original colour of their organza represents the natural colour of the cell but the fabric was then boiled to generate a unique texture and then was “ice dyed”. If you have never heard of “ice dying”, the technique begins by soaking the fabric in a soda ash and water solution. Once the fabric has been soaked, you scrunch some of the fabric together and put ice on top it before you begin layering the different colour dyes. You then continue this process until all the fabric has been dyed and then you wait for the ice to melt. The results are truly remarkable.

Finally, we asked the three teams to summarise their experience in this stage of the competition in one word:

Team OrphaCure chose “awe” as they are in awe of the patients who live with rare diseases every day and are also in awe of each other’s experience and knowledge.

Team Fermentase chose “tenacious”. Following development of the plan and design, the team think it is now about sticking through and making it happen. Along the way they have been selecting materials and fabrics, it is key to stick to their initial ideas and keep their common themes intertwined and present throughout the whole garment.

Team Transmutation chose “Transmutation”. Invoking a strong sense of unity the team think that the current stage of the competition is all about them.

As the Descience competition continues, we love discovering the marvellous creations of some of the most talented individuals, both from the scientific community and the fashion design sphere. With such remarkable ideas being brought expertly to life we are certain the judges will have a hard time later this year!

To learn more about this fantastic project see also: “Descience – Behind the Scenes”, “Descience – The Sketch” and “A Fusion between Fashion & Science”.