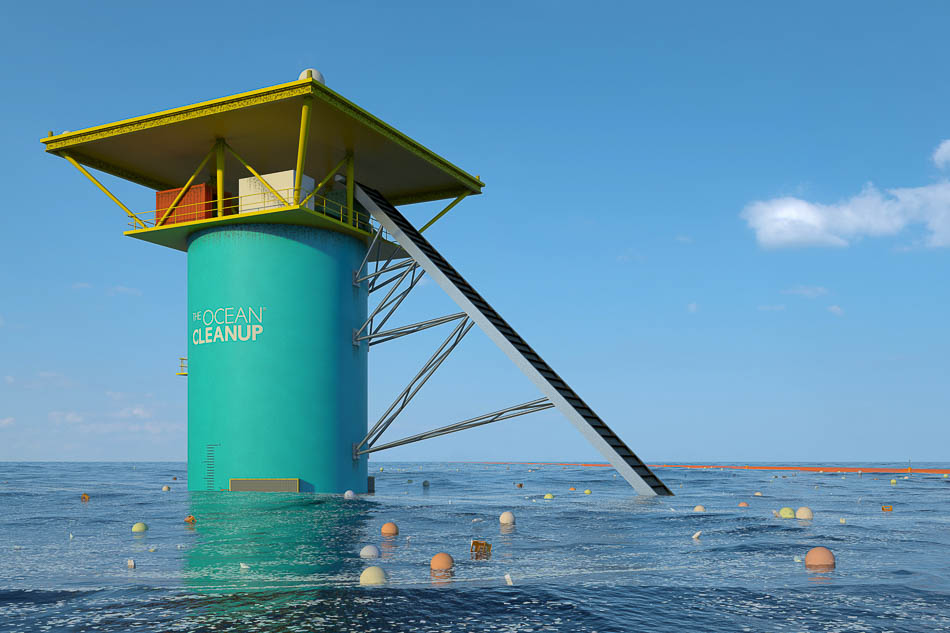 To Cleaner Oceans And Beyond

Mention paradise and most people think of crystal clear waters, but look more widely and you will find that the oceans are full of litter. Thankfully, The OceanCleanUp, Parley for the Oceans and The Seabin Project have started a battle to save the oceans.
Share on facebook
Share on whatsapp
Share on linkedin
Share on twitter

NORWICH, United Kingdom — The world’s oceans are amazing gigantic spaces housing a multitude of marine life, from beautiful turquoise waters to the dark royal blue of the deepest, darkest realms where land is far far away. But take a closer look at the oceans in finer detail and you will see a litter of debris, of junk and plastic to name but a few alien objects, not only defacing the beauty of the oceans but killing marine life as we know it. However, there are several groups who are not taking this clogging up of our oceans lightly and have devised techniques and methods to counteract this destruction and hit it head-on in the battle to eliminate the debris and allow the oceans to thrive to their fullest.

Through researching these diverse methods from very different theorists, I discovered that perhaps a battle to save the oceans is upon us. To my surprise, I never actually realised that so many entrepreneurs were actively seeking a solution to this problem. They all have the same goal but are, at the same time, extremely diverse in their approach.

The Seabin Pty Ltd was founded by two Australians. Andrew Turton, a recognised boat builder and avid sailor/surfer conceived the Seabin concept after constantly witnessing the amount of debris that builds-up in the mouths of marinas. His partner, Pete Ceglinski, an industrial designer with injection-moulded plastic products and surfer alike. It was during 2004, when Pete Ceglinski crossed over to the yachting industry, that the collaboration with Andrew Turton on the Seabin venture started, with the assistance of a minimal investment by Australian marine technology development company, Shark Mitigation Systems Pty Ltd (SMS). This is the moment where their passion to save the seas took off. The project is designed for floating pontoons, marinas and yacht clubs.

Based in Palma Mallorca, Spain  the design centre “The Sea” is a factory space, purposely built for creative technology of The Seabin Project, hosting an office, a gallery and a workshop. The location is essential as it is the central hub of Europe’s marine industry, thus allowing quick international access. The end of 2015 saw The Seabin Project enter its final prototype phase incorporating intensive product testing in the “Real Club Nautic” marina and yacht club based in Palma Mallorca.

In November 2015, Seabin Pty Ltd launched a crowd funding campaign seeking donations to provide additional seed capital for the commercialisation of Seabin. As the masterminds behind this project explain:

The more money we can raise the better we can build the Seabins and the more efficient they will be.

The Seabins are available as a pre order through Indiegogo only. The Indiegogo price is USD$3,825.00 for a unit.

With shipping of The Seabin to start in mid to late 2016, Andrew and Pete pride themselves on making nearly everything in-house, however initial outsourcing occurs at the beginning. As Andrew and Pete state: “The first run of the Seabins we will need to outsource some components and already have suppliers here in Europe on standby to start producing when we give them the green light. We will then assemble everything locally.”

We want to build the Seabins in the most sustainable and responsible way we can afford and to reduce our carbon footprint as much as possible.

They passionately conclude: “Imagine building seabins from recycling our own captured plastics and materials to build more Seabins. Now that would be something!”

Boyan Slat is a young Dutch entepreneur and inventor who, at such a tender age, actively creates technologies to tackle global issues of sustainability. As founder and CEO of The Ocean Cleanup, he is responsible for the overall strategy and cleanup technology development.

Already Boyan Slat has been recognised as one of the 20 Most Promising Young Entrepreneurs Worldwide (Intel EYE50), and was crowned 2014 Champion of the Earth, the United Nations’ highest environmental accolade. In 2015, HM King Harald of Norway awarded Boyan the maritime industry’s Young Entrepreneur Award.

Taking care of the world’s ocean garbage problem is one of the largest environmental challenges mankind faces today.

The Ocean Cleanup is a company that develops technologies to extract, prevent and intercept plastic pollution. Its ultimate goal is to fuel the world’s fight against oceanic plastic pollution by initiating the largest cleanup in history with the support of a team of over 100 people in the fields of engineering, physical oceanography, ecology, finance, maritime law, processing and recycling.

Boyan Slat explains: “The vast majority of the plastic in the garbage patch is currently locked up in large pieces of debris, but UV light is breaking it down into much more dangerous microplastics, vastly increasing the amount of microplastics over the next few decades if we don’t clean it up.”

It really is a ticking time bomb.

With the first array being an essential step towards The OceanCleanUp’s goal of cleaning up the Great Pacific Garbage Patch. The array is projected to be deployed in Q2 2016. An area off the coast of Tsushima, an island located in the waters between Japan and South Korea, is currently being researched.

Spanning 2000 meters in the length, it will become the longest floating structure ever deployed in the ocean. With the operation lasting approximately two years, catching plastic pollution before it reaches the shores of the proposed deployment location of Tsushima Island. Whilst Tsushima Island is evaluating whether the plastic can be used as an alternative energy source.

The scale of the plastic pollution problem, whereby in the case of Tsushima Island, approximately one cubic meter of pollution per person is washed up each year, has led the Japanese local government to urgently seek active real-time innovative solutions to the problem.

Not happy to stop there, within five years, after a series of deployments of increasing scale, The Ocean Cleanup plans to deploy a 100km-long system to clean up about half the Great Pacific Garbage Patch, between Hawaii and California, and thus, creating a mission to save the oceans on a gigantic scale.

Boyan Slat explains that to further develop their cleanup technology, it is essential to know how much plastic is out there. “The Mega Expedition should answer that question for us. My sincere thanks goes out to the crews of the participating vessels for making this crazy idea a reality.” he continues.

At the end of July 2015,  The Ocean Cleanup set sail on the Mega Expedition. With a fleet of around 30 vessels departing from Honolulu, they went on a mission to gather data to find out how much plastic is floating in the Pacific Ocean. This operation is in preparation of the large-scale cleanup of the Great Pacific Garbage Patch, which is scheduled to begin by 2020.

The fleet’s target is to cover a 1.4 million square mile area between Hawaii and the US West Coast, creating the first high-resolution map of plastic in the Pacific and enabling the Mega Expedition to collect more data in three weeks than was gathered in the last 40 years combined.

Protecting the oceans should be a priority for all of Earth’s citizens. The Ocean Cleanup is taking an innovative approach to preserving one of our most critical resources and raising visibility of this global challenge.

Adidas And Parley For The Oceans

Not content with being one of the world’s famously known sportswear creators, Adidas have teamed up with Parley for the Oceans and joined the fight to rid the oceans of plastic and debris. Using the creative and technological brains, Adidas have created a world’s first shoe, a sneaker, made entirely of yarns and filaments reclaimed and recycled from ocean waste and illegal deep-sea gillnets.

Eric Liedtke, Head of Global Brands and Member of the Executive Board at Adidas AG, commented during a press release in 2015: “We are incredibly excited to join Parley for the Oceans as they bring the cause of the oceans to the attention of the United Nations.” He added: “Adidas has long been a leader in sustainability, but this partnership allows us to tap into new areas and create innovative materials and products for our athletes.”

We invite everyone to join us on this journey to clean up the oceans.

With the same spirit, Cyrill Gutsch, Founder of Parley for the Oceans stated:

We are extremely proud that Adidas is joining us in this mission and is putting its creative force behind this partnership to show that it is possible to turn ocean plastic into something cool.

Eric Liedtkh and Cyrill Gutsch talked about the partnership and showcased a unique prototype product:

The concept shoe illustrates the direction Adidas and Parley for the Oceans are taking, ahead of consumer-ready ocean plastic products being revealed later this year.

As founding member, Adidas also supports Parley for the Oceans in its education and communication efforts, as well as its comprehensive Ocean Plastic Program (A.I.R., Avoid, Intercept, and Redesign) that intends to end plastic pollution of the oceans. Since the partnership was announced in April 2015, Adidas has taken concrete immediate steps in this direction; such as removing all plastic bags from it’s stores by mid 2016. It has also eradicated the complete use of plastic in micro-beads in shower products. Adidas actively promotes its employees to take part in the removal of plastic debris from coastal areas and is now at the forefront of design in the creation of the ocean plastic sneaker, which plans to be launched into the retail market late 2016.

I am both astonished and excited; firstly, at the vast amount of plastic debris that is deliberately thrown into oceans worldwide posing serious threat to both marine life and the oceans as a whole. Secondly, I am pleased to find that there are serious entrepreneurs actively devising ways and means to find a solution to this catastrophic problem, whilst at the same time prevent it from reoccuring for generations to come. And why not, just think, for a second, what you are doing with your plastic when you are out on the ocean.  Are we all not partners in the same race?