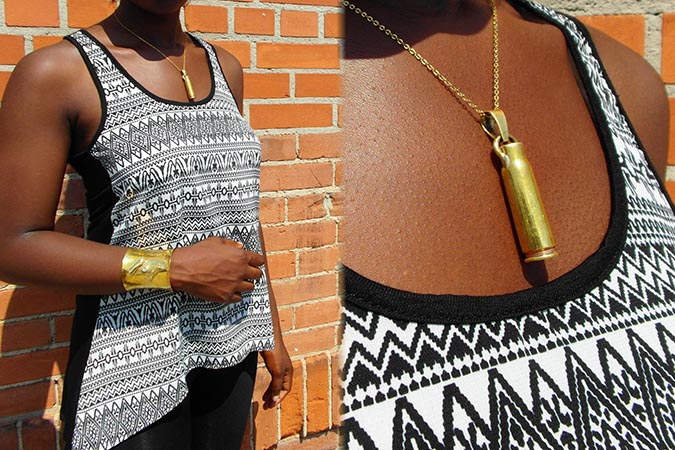 TORONTO, Canada — The old adage that “one man’s trash is another man’s treasure” could be a cornerstone of the sustainable fashion movement. The idea that there are alternatives to throwing things out once we have used them is revolutionary in the face of our fast fashion culture, which encourages low prices, large quantities and unethical production practices. Yet ideas such as recycling and upcycling are encouraging people to find new ways to use old things, embrace quality craftsmanship and lead fashion trends.

What if we were to take seemingly useless items, things we throw away or deem as insignificant, and turn them into something wearable? That is exactly what a group of artisans have done in Cambodia, as they produce jewellery made of bombshell remnants, old bullet casings and other recycled materials, proving that battle scars can be beautiful too.

The Faces Behind the Product

From 1967 to 1975, the people of Cambodia suffered through an horrific civil war and genocide that left the country broken, haunted by memories of the not-so-distant past and littered with unfortunate relics of war.

These littered items have now become hope for a group of artisans, who, with professional training, production and marketing support plus other assistance, are handcrafting jewellery and accessories to bring them to the global market.

The stories these artisans have to share are as inspiring as their creations. One example is that of a 32-year-old man who was left orphaned by the civil war at the age of 8. Through an orphanage centre, he learned the art of jewellery-making and received the opportunity to continue his education. Now, he is part of a team of eight other jewellery artisans, who are making bombshell and bullet jewellery with the three-decade-old recycled war remains.

Another example is that of a 34-year-old single mother in rural Cambodia. After having survived the civil war, she found herself as the victim of an acid attack which, in 1999, was a common form of violence in Cambodia at the time. Her disability caused her marriage to fall apart, leaving her with the sole responsibility of a daughter and elderly mother. As she faced severe financial hardship, she found that her knitting skills could be used to generate a form of income. With the support of a regional cooperative, she has developed her skills further and now produces bags, cushion covers and bracelets. Through this work, she has not only combated poverty and the lack of opportunities for her daughter, but has also gained a sense of dignity while facing the stigma of being blind.

Hope for the Future

Through collaboration between designers such as Shopanthropic, which features a collection of Cambodian-made jewellery from bullet casings and other recycled materials, and cooperatives, these producers finally have access to:

Perhaps the most exciting part of their stories are the end results they produce – quality, hand-made, sustainable and ethically-conscious pieces that are allowing a country to heal from a tumultuous past.

From Trash to Treasure

Any fashionista will agree that there is no better therapy than retail therapy. Yet with beautiful pieces, such as the Recycled Bullet Pendant, part of Shopanthropic’s Bombshell collection, the therapy goes both ways. The jewellery-making being done by these artisans is allowing them to earn a meaningful livelihood, gain a sense of independence, produce fashion that does not harm the environment, and help a country heal from a tragic past. So next time you are eager for a special new accessory to complement your latest look, consider how you can turn trash into treasure or a bullet into something beautiful.