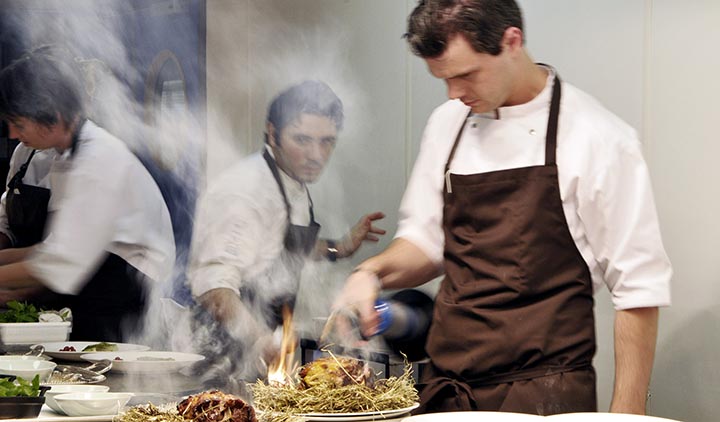 A Taste of NOMA: The Culinary Experience of a Lifetime

LONDON, United Kingdom — On a cold and wet summer afternoon in London, I arrived at Claridge’s, Mayfair, where I was warmly welcomed with a glass of Laurent-Perrier Champagne. The weeks of anticipation had finally come to an end and as the Olympic City began to buzz, I was preparing myself for the culinary experience of a lifetime: a taste of the acclaimed Danish restaurant Noma, by Chef, René Redzepi hosted for ten days exclusively at Claridge’s.

The chatter of excitable diners grew as an army of pristinely dressed waiters began to expertly scuttle around every corner of the room, carrying what could only be described as plant pots! As the first dish of edible flowers, plants and “soil” (!) was served, all became clear: “The narrative is based on foraging, and food from the ground may have earth, insects and ants around,” explained Eugene Leonard, Claridge’s Director of Food & Beverage.

After our adventures foraging around the garden, across the countryside, along the shoreline and through the forest, it felt like we were being lifted to the skies on a citrus cloud.

Our journey had begun in our own back garden, but we were soon walking towards the allotment as cabbage was served next. It arrived sealed in an old-fashioned jar, and my first thoughts were that some exotic aroma had been captured to enhance the flavour of the cabbage. However, as I looked more closely and heard some muted shrieks, I noticed that crawling on the leaves were several ants!

I soon learnt that the ants were unique ingredients as they contained an enzyme that had the flavour of lemongrass. They had been flown in from Silkeborg Juntland, Denmark in someone’s hand luggage! “We were running out of ants so we had to ask the ‘ant guy’ to come over to London again with more,” commented the Head of Chefs and right-hand of René, Matthew Orlando.

After such an entrée, we were immediately returned to our British comfort zones with a unique and superbly executed take on tea, scones and caviar, taking us back to our garden table on a sunny afternoon. The “tea” had crushed raspberries submerged in a fragrant infusion of earl grey, lemon and raspberries – a very well balanced taste.

Then arrived the Danish bread, which I smothered in a layer of sublime virgin butter and devoured it swiftly, setting the base for the next dish, which took us from the garden to a walk along the beach as a Belon oyster from Brittany was served with samphire and butter milk. The “minerality” of the Riesling Pinot Gris, Clos du val D’Eleon, M. Kreydenweiss, Alsace 2008 from the recommended wine list was the perfect complement to our seaside experience.

From the beach we moved to the fields as a mouth-wateringly delicate steak tartar was served with sorrel, juniper and tarragon. We were heartily invited by Claridge’s team to “get our hands dirty.” With our hands washed, we were then fed like…horses! Celeriac, which formed the basis of the next course, is only fed to horses in many parts of the world. However, if you roast the celeriac for several hours, place it on a thin layer of cheese and serve it in a rich truffle sauce, what results is food fit for a king.

Our banquet continued as we were presented with lamb marinated for 24 hours and roasted for 48, accompanied by a fermented pea and fresh cheese sauce with caper-berries. As I am sure you can imagine, the meat literally flaked off the bone and melted in the mouth.

I now had that pleasurable feeling when you have consumed just the right amount of food and wine. However, there is always space for dessert and for the final course we were treated to a signature Noma dish: walnut, ice cream and dried berries frozen in liquid nitrogen to produce a taste so unique and texture so light that after our adventures foraging around the garden, across the countryside, along the shoreline and through the forest, it felt like we were being lifted to the skies on a citrus cloud. Until I came crashing down with the realisation that I was due back in the office in 15 minutes!

Courtesy of Claridge's and the Noma team