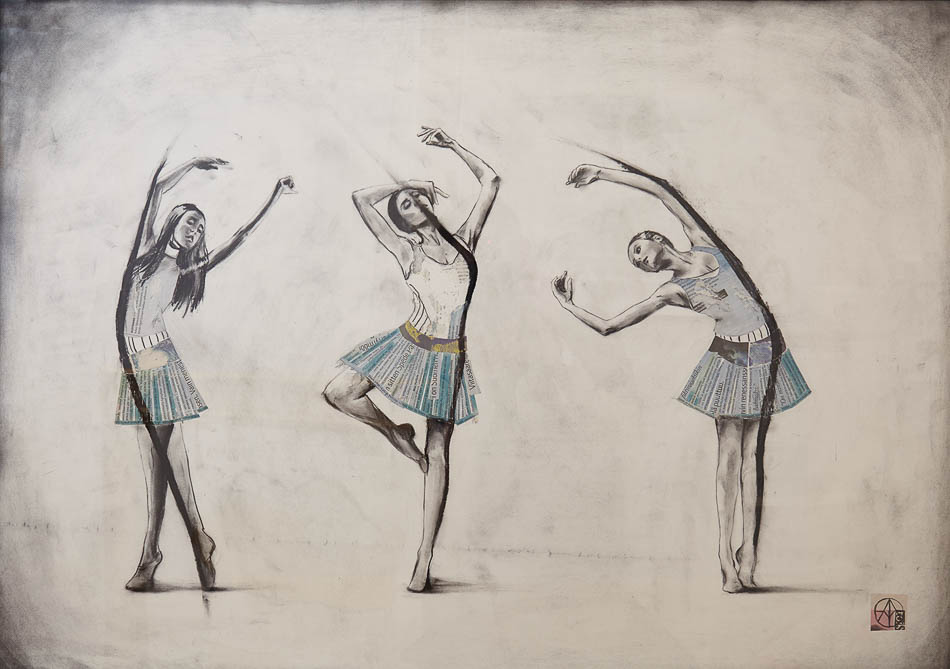 MUNICH, Germany — I recently had the opportunity to spend a couple of days with Michael (Mais) Sundermann, a German creative director and painter based in the Bavarian capital.

On our first day together, we met in my studio for a portrait session and an interesting chat about his art, his day job and how each play important roles in his life. During our second day together, the following weekend, I went to his apartment to observe him working and get some insights about his style, technique and artistic background.

Mais, born in 1986, grew up in Munich and studied graphic design at the Designschule. For the last few years he has been working at Serviceplan, Germany’s biggest advertising agency, where now he holds the title of creative director.

Mais got in to painting gradually, from making little objects as a child out of plasticine, moving on to drawing cars with pencils, before eventually taking up painting, at the age of twelve.

His main style of painting combines various techniques, usually including charcoal, pastel colours, acrylic paints and on occasions, newspaper clippings from Finland. The latter struck me as a bit odd, so after questioning him further on the subject, he explained how significant the newspaper clippings were to his artistic development.

At the Designschule in Munich, his course was more graphic design-based and less focused on art, but one day, back in 2006, during an exchange programme at a Finnish art school outside Helsinki, he and a fellow student had a whole room, overflowing with supplies, to themselves for the whole day. It was then that he incorporated newspaper clippings in his work for the first time.

Mais said that this session, which lasted from 10am until 2am the next day, is when his expressive side, as opposed to his structured, graphic design side, really came to fruition. It was when he truly began to enjoy drawing and creating art.

After the month was up it was time to fly back to Germany, so he took as many Finnish newspapers as he could carry and still has enough for using in his work today.

Mais Sundermann and His Technique

“First comes the sketch/outline in pencil, followed by charcoal thickening and shading, then pastels and finally acrylic paint,” says Mais when explaining his technique. The use of charcoal is essential to his work as, despite charcoal being difficult to rub out, meaning he must throw a lot away, he has a lot of control over lines, shading and points of light using his fingertips and erasers to smudge areas.

This means that due to charcoal’s versatility, Mais is able to go back and forth, constantly modifying each gradient and each area before he is ready for the next step of his artwork.

Mais describes the beginning of his artwork-creating process as requiring a lot of concentration due to the detailed lines and shading necessary, creating the basis for his picture. What I also found very interesting is the use of frisbees as colour palettes.

It is fascinating to observe how Mais progresses on his work. The next step of his process is far less controlled and more expressive. Using various brushes, he paints with big swiping motions and rough dabbing. This is the moment when his images begin to show his recognisable and signature aesthetic.

Mais at Work and at Play

While our conversation is primarily on Mais’ art work, we also touch upon the differences between his agency life and private art, a balance that he loves.

“In the agency, my work must be understood and useable for my clients and users. They just want the product, website, app or interface to do what it is supposed to do,” he explains. More aptly and generally put perhaps, he states:

This in mind, he says that it is the complete opposite to his agency work: “My art is for me and my work is for the masses,” meaning that his art does not necessarily need to please anyone but himself.

Mais does not consider his work to be symbolic, rather he finds inspiration in the form of observation, be that in the flesh or from a photograph, and then realising it as a piece of art. “I find beauty in the little things like the blush on a cheek or the posture of a body,” he states with a smile.

Mais has had multiple, both solo and group, exhibitions in Munich and has sold many of his works. He tells me that he sells them at reasonable prices, not for the money but to create space in his apartment and to have his work out there in the world as much as possible and not just stored in his cellar.

Asking about his future plans, despite soon becoming a father, Mais says he would love to be able to incorporate his artwork in to his agency work, to be able to combine his expressive side with his daily work.