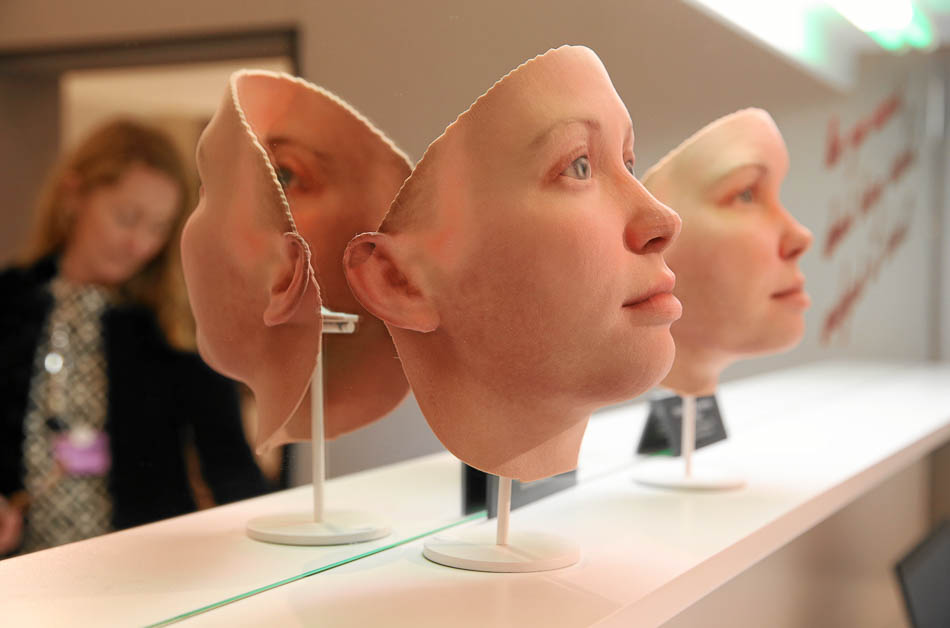 SAN FRANCISCO, United States — Science-based artist Heather Dewey-Hagborg premiered two DNA portrait sculptures titled Radical Love: Chelsea Manning during the World Economic Forum at Davos, in the Swiss Alps last January 20-23. The 3D models were designed using scientific analyses from DNA hair and cheek swab samples collected from Manning for independent data extraction to determine eye colour, ancestry and tendency to be overweight or not; leaving out gender association testing due to Manning’s new transformation. The collected data was then entered into a 3D morphable model based off 3D scans of people’s actual faces to help map out features.

During this process, Dewey-Hagborg used her unique artistry in DNA data experimentation to analyse and manipulate the programme software to interpret in her own way, the face most representational of Chelsea Manning. Her work emphasised on conceptions of the natural and artificial, exploring art as research and critical practice, which lead to her success in designing numerous inspiring science-based projects, including this, to be featured in Paper Magazine, the New Yorker, New York Times, Arts Asia Pacific, Wall Street Journal, the Times of London, Newsweek, New Scientist, Popular Science, among many others. Dewey-Hagborg’s projects typically start with an intriguing question. As Dewey-Hagborg says:

The questions that intrigue me are philosophical, scientific, political and theoretical. I have long been fascinated by language and speech, by learning and knowledge representation, by algorithmic models and metaphors, by biological and ecological systems, and by the cultural organisation of data as information.

Who is Chelsea Manning and why were the DNA portraits so significant?

Twentyfive-year-old Private Manning was an American soldier born Bradley Edward Manning, diagnosed with gender identity disorder while in the army. He was arrested in May 2010 for leaking classified information to WikiLeaks, and was charged in the biggest leak of classified information in U.S. history, which lead to his sentenced of 35 years in prison on August 2013. He later changed his name to Chelsea Manning. At the time, Paper Magazine was doing a feature story on Manning and photos of her were basically non-existent. The magazine commissioned Dewey-Hagborg to create a forensic DNA phenotype portrait of Chelsea Manning.

“Radical Love is a homage and exploration of gender identity stereotypes in forensic DNA phenotyping. The portrait was developed in collaboration with Paper Magazine in response to whistleblower Chelsea Manning’s inability to be photographed while incarcerated as a political prisoner,” Dewey-Hagborg explains further.

Why was the DNA portrait sculptures premiered at Davos?

World Economic Forum is a Swiss nonprofit organisation, whose mission is committed to improving the state of the world. Annual winter meetings are held in Davos, Swiss Alps where thousands of top global business and political leaders, scientists, economists, selected intellectuals and journalists gather in to discuss world issues. This year, the theme was “Mastering the Fourth Revolution”. Understanding how technology could change our lives and that of future generations. Curators of the Victoria and Albert Museum in London collaborated with World Economic Forum (WEF), to exhibit Dewey-Hagborg’s 3D-printed, DNA portrait models of Chelsea Manning at the Davos meeting. The portrait models were aligned with WEF’s vision of how this type of emerging technology can help advance our future. If we are now capable of creating 3D portrait sculptures of someone who is virtually invisible, what else are we capable of creating next by continuing to integrate this type of practice based research art, with 3D technology? It demonstrated the significance of fusing art with science and technology. Dewey-Hagborg, when asked why Davos was chosen for the unveiling, replies:

I thought Davos would be a perfect place to unveil the work – to bring visibility to Chelsea, who has been effectively erased from view. To confront in particular individuals in a position of power to act on her behalf.

Radical Love DNA phenotype portraits of Chelsea Manning went from being featured in Paper Magazine, to 3D-printed sculptures premiered at Davos. The recent unveiling brought back questions of whether what Manning did was right or wrong? Some considered her to be a hero, while others considered her to be a traitor. This has lead to a difficult but necessary dialogue. Will governments really protect whistle-blowers in the future? Is big brother watching us without our knowledge? Exposing the truth about our government could get us incarcerated! When it comes to our government, do we actually have as much freedom as we think?

Dewey-Hagborg concludes: “The bigger picture, beyond me, is that I hope this kind of work can make a real difference, raise consciousness, fight oppression and work towards a more equal, peaceful and humane future.” And we totally agree with her.