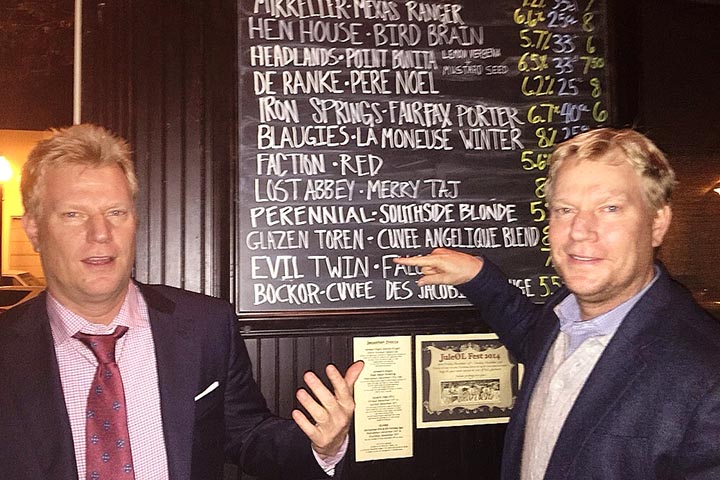 We came across Zach and Seth Siegel, who happen to be twin brothers working at the same company. Could it be that they contribute to each other’s successes or are they so competitive they drive each other to succeed? Let’s find out!
Share on facebook
Share on whatsapp
Share on linkedin
Share on twitter

SAN FRANCISCO, United States — The San Francisco commercial real estate market has been on fire as high demands for start-up and social media space are sending both rents and building sales soaring. Twin brothers Zach and Seth Siegel, both currently working for Cushman & Wakefield, one of the largest commercial real estate firms in San Francisco and the world, have brokered many of those transactions. All are high-profile, multi-million dollar deals, which include big institutional building sales and leases to Google, Uber and Square. The Siegel brothers are a savvy duo currently dominating the commercial real estate tech market in the Bay Area. Though, what we find fascinating about the Siegel twins is not their professional success, but rather their brotherly connection that contributed to it. Most people would rather opt for anything else than having to work with a sibling at the same company. However, this duo have an identical kinship that keeps them almost inseparable, even at work. As Seth comments:

I think as brothers and twins, we have always been close, but working together has sort of redefined our relationship.

Although Seth, the younger of the two (by two minutes), is more shy and low-key, we find them both to be smart and sincere. They possess an effortless charm and confidence that seems to anchor their professional power at work. Let’s find out how working together not only strengthened their brotherly bond, but it also contributed to their success.

The Brothers teaming up at work

Zach joined Cushman & Wakefield in 1991, and is currently the Executive Director in the Brokerage Services group, responsible for leasing buildings. While Seth later joined the company in 2004, as Senior Director in the Investment Sales Services group, responsible for the sale of buildings. Since Zach is in leasing and Seth is in sales, they do not compete for business in any way. Instead, they often hang-out after work, have drinks and exchange possible leads connecting them to future clients. Teaming up expanded their network and doubled their support system therefore giving them an advantage over other brokers working on their own fostering an even stronger sibling bond. Oftentimes, they find deals suitable for collaboration. Seth explains:

“A good example is the building at 1455 Market. It is a 1 million square foot office building in mid-market. My team brought in the buyer for the property and Zach and his team helped validate the market for the new buyer, and has since leased the entire building. Square and Uber are now headquartered in the building. Other buildings we have sold together include 160 Spear, 1155 Market and 394 Pacific. All the buildings have some element of tech tenancy.”

Working together played a big role in their success

During Zach’s 23-year career, he leased over 6.2 million square feet on behalf of landlords, represented tenants in over 1.2 million square feet of leases, and participated in the successful acquisition/disposition of assets valued in excess of $1 billion dollars! Of course, with the support of his brother Seth, who joined the company in 2004, when Zach’s career quickly excelled. Zach elaborates on the advantage of working with his twin brother:

“In many cases, a sales assignment he may be working on will convert to a leasing assignment that I will work on,” Zach continues. “By the same token, many of the office buildings I lease will sell at some point in the future, which presents a great opportunity for my brother. It is truly the case where our respective experience and relationships are accretive to each others’ success.”

Seth’s CV is equally impressive. In the short time working at Cushman & Wakefield, he helped sell numerous buildings to high-profile tenants, making him one of the top brokers in San Francisco’s tech market. Some of the buildings he sold include – 188 Embarcadero (Google is the tenant), 795 Folsom (Twitter was a tenant, and now Kabaam), 410 Townsend (Adobe is the anchor tenant), 800 Market (Uber started there), and 539 Bryant (incubator building for a bunch of tech companies).

What we learned from the Siegel Brothers

In a fast-paced working environment with big paydays, it is easy to assume someone in that industry to be competitive and egotistic. Yet surprisingly, the Siegel brothers were not that way at all. Both are totally cool, easygoing and adventurous. They enjoy travelling, golfing and sunny hot weather. In fact, Seth has a place in Palm Desert because what better place to combine golf and extremely hot weather, than Palm Desert? So when the twins are not hard at work trying to close deals, they treasure quality time with friends and family.

We were intrigued by the Siegel brothers’ twin connection that drew them to work together in the same industry, company and office building. And wondered if working together had contribute to their success? We found that, yes, two is better than one. But what came as a surprise was how they charmed us with their pleasant personalities, and impressed us with the way they teamed up to dominate the commercial real estate tech market in San Francisco! We applaud their brotherly relationship both at work and play. So siblings everywhere, rejoice! The Siegel brothers prove that working together with a sibling, can lead to success.