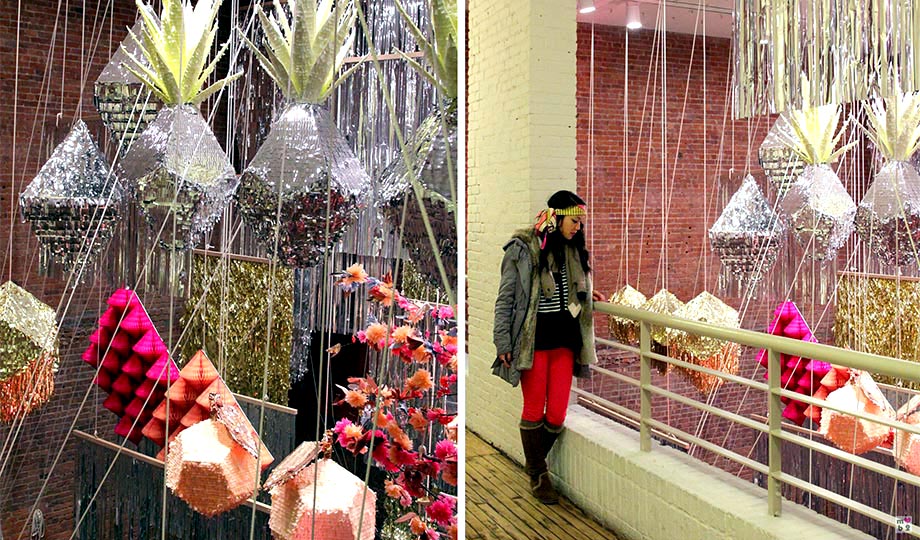 The shaggy geometric shapes transform simple materials into elegant objects that make any room or display feel unique, spontaneous, and playful. Inspired by Nicholas’ Hawaiian upbringing and Julie’s Taiwanese-Chinese background, Confetti System’s scenes evoke memories of leis, lanterns and lucky envelopes. Julie has been influenced and interested in dioramas, like the ones at the Metropolitan Museum of Art, since she was a little kid.

The idea of installing art and being able to change the environment of a small space always fascinated her. Nicholas on the other hand was always wanting to make things by hand as a child and dove into every imaginable craft project. Together they have carved out a genre of decoration unto itself that is in seriously high demand.

Our work is an expression of our combined cross cultural memories, drawing inspiration from rich sensorial experiences within temples, clubs, and other places of healing.

Both Ho and Anderson have backgrounds in prop styling and met on a photo shoot way back in 2001. They never thought that making paper objects would become a wildly successful internationally known business!

They started off by making “party” objects for friends and this soon developed into a multifaceted genre of design that is hard to categorize since the pieces made look just as good in a private home as they do in a store window. As Ho and Anderson like to say they are “decoration designers”, clearly blurring the lines between art, design and craft.

Each project that Confetti System embarks on is unique and requires a thoughtful concept to work with each individual brand and environment. It is very different making garlands for the J Crew window compared to the travelling tour of the Yeah Yeah Yeahs! Their various colour tones and continual use of gold and silver metallic have been fashioned into more than just decor, including masks, curtains, and jewellery. Their painstakingly detailed work has been reaching mega audiences across the globe and becoming the go-to décor of the so-called “gliterati”.

Just recently, Confetti System styled the new flagship store of J Crew in London with large scale quintessentially iconic British items. Ho and Anderson spent five days putting together the corner window display after having fabricated everything in a Brooklyn studio and shipping it flat-packed to London. Jenna Lyons, creative director of J Crew, has continually chosen to work with Confetti System on various projects because their talent and concepts are always expanding and creative.

This past summer they did their first instillation at MOMA/PS1 in New York City which was a large scale piece of movable objects that could be rearranged daily to enhance and change the visual perception.

Each piece was hung from a pulley that allowed us to raise and lower each element and create hanging compositions with our piñatas, metallic walls, flower branches and oversized fruits.

To say that Confetti System is the reigning king and queen of party decor is an understatement, so if you are looking for something festive this holiday season look no further! The original series of party-inspired objects using paper, silk and leather which are now available on their online store, so everyone can decorate their own party with glamour and glitz this holiday season!