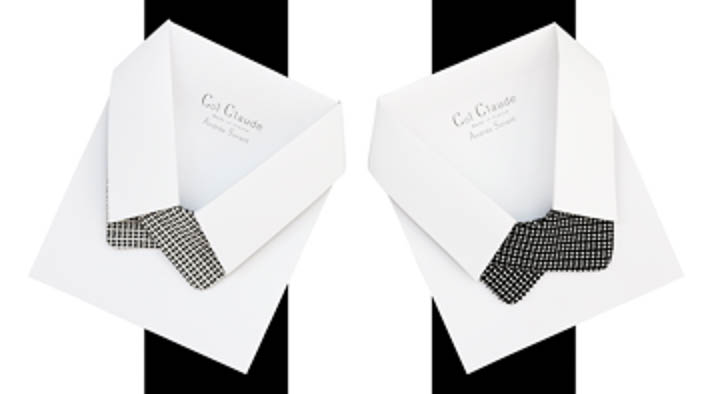 Andrée Sorant: a new twist on a classic accessory

PARIS, France — Perhaps no accessory is more emblematic of Parisian chic than the silk scarf. Nonchalantly tied around the neck, worn as a belt, or twisted into a coiffure, the scarf is worn by French women of all ages and styles. Even banished to the bottom of a dresser drawer, the scarf remains a family heirloom to be handed down to the next generation.

Now comes Louise Motte, a 30-year-old fashion designer from the north of France, to give a whole new dimension to this wardrobe staple. Her limited edition silk scarves, produced and marketed under the label Andrée Sorant, are based on designs that combine soft colours with bold, geometric shapes. “A silk square can be very classic,” she notes. “I wanted to make it more contemporary.”

Louise’s first collection of 10 scarves, made in the Lyon factories that have traditionally supplied silk to the French fashion trade, reflected her fascination with the pure architectural lines of the 1950s and 1960s. She was particularly inspired by the work of a Charlotte Perriand, a 20th century French architect and designer and contemporary of Le Corbusier. Influenced by contemporary Japanese work, she used highly original layouts that allow each scarf to be folded and tied in different ways to highlight a particular aspect of the design.

An avid collector of vintage silk scarves from Hermès, Carven, Yves Saint Laurent, and others, Louise launched her own line in Autumn 2013. She named it after her maternal grandmother, an elegant free spirit who lived and worked on her own, married late and took first place in a tango dancing competition – all quite remarkable in provincial France of the times. “It was my way of paying homage to her, of course, but it was also her values of personal freedom and avant-gardism that I wanted to convey,” Louise says.

Louise grew up in Roubaix, a former worldwide textile capital near the Belgian border. Following the completion of a Masters degree in textile design in Lille, she worked as a colourist for Décathlon, a large sports company, and then as a designer for Promodes, a national retail group. A year working in Berlin and then a stint on the fabric team of Sonia Rykiel allowed her to further explore the intricacies of colour on fabric.

Sold on-line and in her atelier-boutique in Roubaix, Louise’s scarves have been joined by another accessory: the “col Claude”, a whimsical piece of printed silk for men and women worn under a collar. The name is a play on words that refers to the “Claudine collar “popular in the 1950s and 1960s and was inspired by a friend of her father’s, named Claude, who used to sport a “twist collar” from that era. “It’s simple and more discreet than a bow tie,” she notes.

For the holiday season Louise is working on scarves in soft wool with eclectic designs. In the New Year she hopes to find new sales outlets in Paris, London and other European capitals, where her work has been favourably received in fashion salons. Given the eternal fascination with scarves, Louise’s quirky designs and colours are sure to enjoy wide appeal among women and men of all ages.