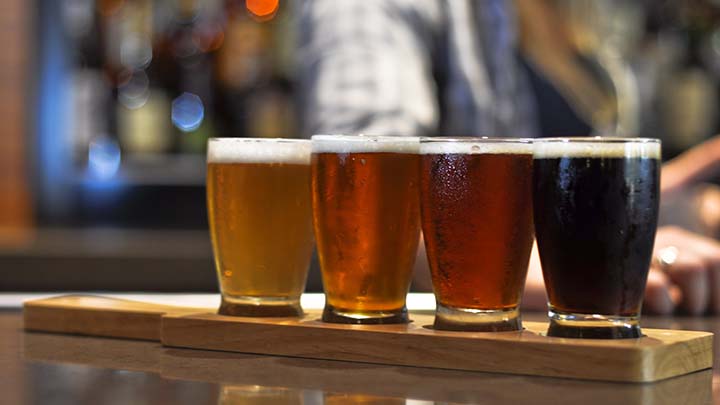 NEW HAVEN, United States — Let’s face it, America has a reputation for being well…unruly and rebellious. As upstarts, we’ve always done it our own way. Craft beer is a prime example of our rebellious nature. Beer has a long history, and so does craft beer. The history of American craft beer reaches back to approximately 1612 in New Amsterdam, which we now know as Manhattan, New York. Notably, there were 4131 breweries in 1873, which quickly waned with the Prohibition era. In the post-Prohibition period, there was some revival of craft beer but the moment quickly sputtered out. A small movement began in the 1970s, but didn’t truly find a foothold until the early 2000s and truly exploded in about 2012. At last count, there are more than 3,400 craft breweries in the United States.

The Oxford English Dictionary defines a craft beer as:

A beer made in a traditional or non-mechanised way by a small brewery.

A Journey to Enjoyment

Craft breweries are small by design and meant to be experienced in a group. It’s an experience, not just another drink. The popularity of craft beer, especially microbrewed beer is no mistake. This is a testament to the movement for quality beer over a quantity of beer. For the newest drinkers, the millennials, high-quality beer is a way to relax and forget about employment and housing woes, and a great way to spend time with friends. Visiting breweries for tasting and taking trips to beer festivals provides weekend fun without the high ticket price many cannot afford.

This is a great example of hundreds of like-minded beer drinkers getting together to revel in beer and conversation. This particular event debuted in 2012, but is modelled after many such events that take place around the country.

Prior to this event, I’d never visited the Newport Storm Brewery, which not only brews beer but also distills rum for Thomas Tew. For the VIB event, only 75 tickets were sold, but when I stepped into the modest tasting room, I was shocked by the size. I have to confide I’ve never been inside a brewery before, but I expected something a bit more grand than I received to be certain. That’s not to say that the room was unkempt or undesirable by any means. Rather it was welcoming and intimate.

In search of the perfect beer, I attended the VIB event. In many ways this even was like a typical beer tasting at a brewery, but there were several notable differences. The most distinguishable of these deviations was the fact that several other breweries were present at Newport Storm. Also of note was the fact that each brewery was presenting beers that hadn’t yet been released to the public. Another digression from the norm was the ability to walk freely around the production floor.

As I walked into the brewery, I was struck by how small the tasting area was. Then, I stepped out on to the production floor with its high ceilings and racks of storage. It had an industrial feel with conveyor belts and a labeling area. The tables set up with staff from other breweries (like Clown Shoes and Harpoon to name a few) were unexpected. The atmosphere was congenial and welcoming. It seemed like everyone was mates from the past, though only small groups knew each other. The tasters compared notes about the different breweries and their offerings as well as sharing personal experiences and the types of beers they enjoyed. This warm and inviting environment was more of a party than a typical tasting with people coming and going and not much conversation. It was also great to speak with representatives from all of the breweries present. They shared thoughtful insights about the beers and suggestions based on particular likes and dislikes. This personal experience made the event truly memorable.

Glass in hand, I anxiously started my journey. The tent was full of people. Map or not, it wasn’t easy to navigate the tent freely. There were 35 breweries present from all over the country. The theme of the event seemed to be India Pale Ale (IPA) this year. The festival was an exciting mix of music, beer tasting and food with several food vendors. The location provided its own historical backdrop. The Great Friends Meeting House was built in 1699 by Quakers, and is the oldest place of worship in Newport.

In the close confines of the tent, everyone became a homogeneous group. We laughed, we talked and we drank beer. The staff from the breweries seemed to be having as much fun as the attendees. They were ready to make suggestions, talk about their brewery’s history, or just chat. The stories and thoughts made you feel close to the products you were consuming. For a few hours it felt like a group of mates rather than perfect strangers.

The Moral of the Craft Beer Story

In a group where apps like UnTappd reign supreme and many don’t have the money to travel the world or live in extravagance, craft beer is a culture. It’s a way to have a good time and forget about what you don’t have. It’s a way to have a night out with friends and it’s something to be a part of. There may be critics but there’s one thing no one can deny, craft beer is still gaining traction and it’s not going away.

Tell us about your craft beer experience!!!